This 2 hectares site is based in Luang Prabang, Laos PDR and is owned by a german investor, Mr. Paul Bauer and his spanish wife Xisca Llabres that was one my students during a PDC course given in Vang Vieng, Laos in 2017.

- An ecological farm with greenhouses, vegetables gardens and a food forest which we opened for farm tours.
- A hosting infrastructure in the form of a Ecolodge, glamping facility with multiple tents and high end bungalows
- A playground area along the Namkhan river with beach sports and children infrastructure
- A restaurant, an outdoor cinema and a horse stable
- Many outdoor activities along the river and around the farm site (tubing, art-crafts...)

My work as a consultant at the beginning (2017) was to advice the owners on development possibilities, on an empty land and from a permaculture and agro-tourism perspective. This was a paid consultancy with a 2 day on the ground site visit.

You will find attached the original consulting proposal that was submitted to the owners.

One year later (2018), as the owners where implementing the eco farm project, they wrote back to me and ask me if I would like to manage the implementation and development of the Eco Farm project. At this time I was living in France. However I accepted to go their on my own (leaving my family in France). I lived, worked, and managed the site with a team of 5 farm workers and up to 8 volunteers for a 1 year period before engaging into another project in the same area.

The design is not 100% permaculture based as the owners, are high end, luxury tourism investors. Therefore they main goals were marketing and income related.

The 2 hectares piece of land that they owned since many years, is bordering the Nam khan river and is very close (20 minutes) from main town Luang Prabang, a UNESCO classified world heritage site and high end eco tourist destination.

When I first visited the land in 2017 there was no major infrastructure. There was a sandy beach side, along the river with some palms and existing vegetation, as also some grass dominated hills and a barren land which was a prior teak tree monoculture. All teaks had been cut since and they had already a plan to invest into 9 Greenhouses with automatic irrigation on the advice of a thaï agronomist, which later became the first farm manager to help them set up the project.
I stayed on site for 2 days and made some recommendations following my observations in a report attached here.

1 year later, after some communication issues with the former farm manager, the owners invited me to manage the eco farm, including design, staff training and production management by including permaculture aspects and techniques.

The main goal from the beginning was to create a productive farm and to set up a edible landscape. Rapidly I introduced a permaculture Orchard, in the form of a food forest attached to the greenhouses, including a mobile chicken coop to regulate pests around the greenhouses and 4 parks to move them around. I trained the staff to 18 compost making and put up in place a compost station.

Additionally I designed for different showcases to increase the production potential but also to highlight permaculture potentials in the form of a farm tour:
The showcases includes:

- A 18 day berkeley compost station
- A mobile chicken coop
- A orchard in the form of a integrated food forest
- Hedge and alley cropping (with Moringas, pigeon peas, cassava..)
- A 200m long rock gabion wall to secure some land from heavy erosion
- A fish tank with a integrated worm/ BSF larvae breeding station
- A seed conservation facility

I managed this project for one year trying my best to share concepts and techniques by improving the integration of systems in a design that benefits the project and the client. 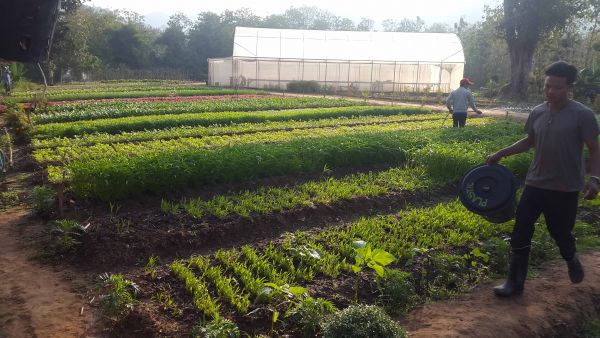